Over at TLF, Adam Theirer is bemoaning the fact that corporations can’t buy up the remaining newspapers.

If we were to believe the rhetoric of some in Washington and various pro-regulatory groups like Free Press, you’d think we still lived in the 1800s and that a handful of newspaper barons like William Randolph Hearst and Joseph Pulitzer still dominated our media landscape. Just today, in fact, Sen. Byron Dorgan (D-ND) introduced a “Resolution of Disapproval”—largely at the urging of Free Press and other regulatory advocates like Parents Television Council—that would overturn a half-hearted media liberalization effort undertaken by the Federal Communications Commission last December.

That FCC effort dealt with just one of the myriad regulations governing media structures in this country: the newspaper/broadcast cross-ownership rule. The newspaper/broadcast cross-ownership rule, which has been in effect since 1975, prohibits a newspaper owner from owning a radio or television station in the same media market. “No changes to the other media-ownership rules [are] currently under review,” FCC Chairman Martin noted at the time, leaving many TV and radio broadcasters wondering when they will ever get regulatory relief.

He has chart after chart after chart, showing the decline in the absolute number of newspapers, the decline in their revenue, the decline in the newspaper readership by age group (kind of silly really, as the reading of newspapers is declining across all age groups) The problem is of course that all of these metrics are wholly irrelevant to the importance of the role that a free press plays in our society, which can not be reduced to mere profitability of the newspaper sector. Further more, by changing the ownership rules, Adam presents no evidence that the newspapers themselves would become more profitable, just that if Walt Disney or General Electric bought them they could probably absorb the loses.

But so what? Newspapers can adapt and will do the thing they do best: uncover corruption. They may not be ever as profitable but all evidence is they will be just as useful:

From the Christian Science Monitor:

NONPROFIT JOURNALISM ON THE RISE
At a time of layoffs and budget cuts at traditional newspapers, foundations and donors are funding new journalism ventures.

SAN DIEGO – The police chief’s rosy crime statistics were a lie, it turned out. The councilman who urged water conservation was discovered to use 80,000 gallons a month at his home, more than five of his colleagues put together. And the school board president, according to an investigation, spent a full third of his time out of town and out of touch.
The Voice of San Diego, a nonprofit online media outlet, doesn’t have enough journalists to field a softball team. Yet it has managed to take on the powerful with the panache of a scrappy big-city paper.
It provides “the best coverage of city politics that we’ve had in years,” raves Dean Nelson, a journalism professor at San Diego’s Point Loma Nazarene University.
The success of the tightly focused Voice, which relies on donors, offers a ray of hope for a troubled industry. Plagued by shrinking circulations and advertising, newspapers are shedding staff and downsizing their offerings. Even the pages have gotten smaller.
By contrast, several nonprofit newspapers – though rare and often tiny – have sprung up in recent years both online and in print, funded largely by foundations and individual donors.

Adam rather lost his temper and posted this reply to my post at TLF, which I am showing below. Those libertarians have a way with words! 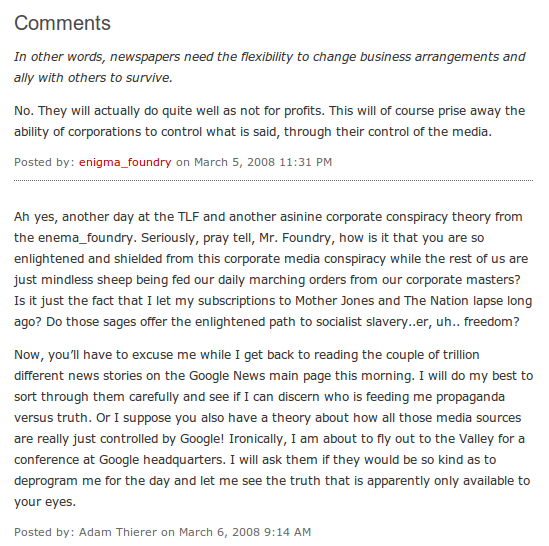 I hope he has something thoughtful to post, so I’ve posted link to this post over at TLF. Wonder if Adam has a reply?